A Word From Ward

Pigeons: Times They Touched My Life
By Dr. Ward Stone

My memories of pigeons go back to early childhood. A picture in the living room of my mother’s home depicted an eighteenth century American barnyard which held some pigeons and a nesting area provided in the barn eves. Apparently this scene was true-to-life as boy told me that he was contemplating a pigeon trap that would be baited with corn to “take care” of a few resident pairs in his hay barn. His plan was to kill the pigeons with a slingshot and eat them. World War II was on then and I think he was unable to carry out the planned “pigeoncide” due to the bigger worries that came with the country being at war.

Later on, I remembered seeing the common multicolored pigeons on Main Street near the train yards in Chatham, New York. They were not disbursed and I suspected that fortunately for the pigeons, the young lad in the past had gained little support or interest from the public in his quest to destroy the Rock Dove.

I do recall going to the hay barn of a dairy farm that I worked on part time as a teenager, who had the idea of limiting the population of pigeons with gunfire. It hardly seemed safe to shoot inside the barn and through the barn’s roof. Farmers want dry hay for good animal nutrition. But also, farmers realize that a fire hazard can be brought rather quickly by molding hay. I had rejected the idea and I am glad that I did not have to explain my thought process to the hard-working and intelligent dairy farmer; resulting in no pigeon fatalities and no at-risk hay or infrastructures upon that day.
I often noted the beauty of flocks of pigeons, with plumage of all imaginable colors and patterns, as they traversed the skies in search of suitable foraging grounds. During this time in my early youth, I searched for Passenger Pigeons (Ectopistes migratorius), which were a distant relative from the commonly seen Rock Dove (Columbia livia) of today. These pigeons had gone from about 4 or 5 billion or so, to extinction by about 1914 with the last known surviving member of the species dying in the Cincinnati Zoo on the first of September that year. It is too bad that Pete Dubacher wasn’t at the Cincinnati Zoo – or any time before the extinction for that matter - for his skill as an aviculturist and his determination (and of course with proper funding) could have made all the difference and the Passenger Pigeons I searched for as a boy could still be here today. However, the best I did around 1950 was some plump Mourning Doves (Zenaida macroura) that I hoped would be Passenger Pigeons. 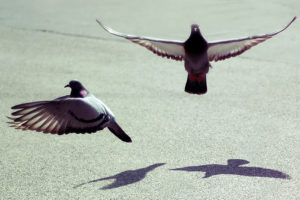 It was hard for a boy to believe that a pigeon that once formed flocks that would blacked the skies during migration had completely died out.
As time passed, my experience with pigeons grew. I also came to know the terrible things that humans often brought to wildlife populations. I heard a great deal of anti-pigeon talks and writing making mostly no sense. There was plenty of evidence with the buffalo, Labrador duck, Carolina parakeet, and dozens of other species threatened with endangered species status in North America as I write this now. The pigeon and I became better acquainted at Syracuse University in the 1960’s. I remember reading in the newspaper about an elderly woman who stopped feeding pigeons outside, as a Syracuse city ordinance directed. She obeyed but instead opened her kitchen window to allow the pigeons to feed on seed in order to continue her honorable deed. In this she showed courage in her defiance of the law that not only showed prejudice and ignorance toward animals but also could be argued whether or not it was even necessary in the first place.

This event only fueled my motivation to learn more about these creatures and prove their right to exist before they too, like the Passenger Pigeon, become eradicated by the human race. It was during my time at Syracuse University that I studied the anatomy and physiology of pigeons and diagnosed pigeon diseases. I studied avian malaria (Plasmodium relictum) in pigeons and studied the change caused by the blood parasite to hematological parameters and chemical changes in the blood of pigeons. I was amazed by the pigeon’s respiratory and circulatory systems, their ability to recover as well as their beauty and charm. It also became harder and harder to use them as experimental animals and I have not used them since, as experimental animals after leaving the university. The university gave me the experience and knowledge to no longer consider the pigeon as an experimental animal in which to study pathological conditions that cause what I perceive as suffering.
The pigeon is unprotected in most legal jurisdictions but has fought back through biological adaptations that help it to maintain their population. Once such adaptation is the pigeon’s ability to nest within the heart of winter when other birds find it hard to reproduce. However, the humble pigeon can be found incubating a nest full of eggs in January and February under bridges and highway overheads, or in the window ledges of metropolitan areas such as New York City and Boston. Pigeons can, as columbiformes, siphon water from the shallowest of puddles using their beat as a straw, and can survive off of a wide variety of wild and agricultural plants. They are able to withstand mass mortality and quickly repopulate, thus overcoming many of their threats by sheer numbers. However, they are poisoned frequently all over the world in order to ever reduce these populations. Buildings from old barns to bridges and highway girders provide the nest sites and over much of the moderate to high human density regions of the world provide the habitat that can encourage at least a moderate population of pigeons to maintain themselves.

Those who advocate poisoning of pigeons will not control their numbers through this method. The poisonings are horrific and dramatic in nature. Pigeons that migrate into the areas left open by the poisoning and the astounding reproductive capability of those new arrivals, quickly replaces the former population. There are individuals who make part of all of their living by poisoning pigeons in a variety of toxins are used such as organophosphate, a nerve agent, which causes asphyxiation in the bird unfortunate enough to consume the poisoned food. A special pesticide, avitrol, is heavily used against pigeons and impacts on the central nervous system and if consumed, can target more than the target species.
Pigeons, and all birds for that matter, should be protected from the use of poisons. Poisons are not accurate and can do more harm than what is intended by contaminating the environment. We must remember that any given ecosystem has more than one species and when a foreign substance is introduced, they all become at risk. For example, corn treated with avitrol frequently kills mourning doves, which may then be consumed by raptors or scavenging birds like the turkey vulture. These poisons cause suffering within the birds and fails to control populations humanely and accurately. Because of abundant habitat, available food, and remarkable adaptations which ensure their survival pigeons have become much in-tune with modern day living.

If looked at not as pests but simply as birds, pigeons provide beauty and wonder in a world in which these commodities are not abundant. Pigeons have undergone extensive negative public relations campaigns lacking in both fact and science. The people who gain good feeling about nature and life through feeding pigeons, a frequent activity in city life, is a positive thing for both people and pigeons. It has gone on for hundreds of years and will continue well into the future. People and pigeons have a natural bond that is world-wide and can be seen where people feed pigeons in parks, build dovecotes in their yards, rescue orphaned racers, and adopt would-be dinner squab from the food industry.

It is one of my most sincere hopes that mankind grows to understand and appreciate this species of bird for what it truly is; an amazing example of perseverance and will to thrive.

Two NYC women that are forever etched in my memory as being extremely important in the battle to stop the posionings and other lethal abuses of pigeons. Toodie Witmer and Mary Kelly. Toodie is retired from the Metropolitan Opera where she had made costumes for the opera stars. Toodie's real love was pigeons and she fed them on the streets and parks of NYC she nursed many injured and poisoned pigeons back to a point of health where the birds could be released so they could take care of themselves.

She also fed pigeons in the vicinity of her apartment in all seasons and for many years. Toodie Is a deminative saintly woman she had a distinctive way of speaking. I think would be liked by Pope Francis and Saint Francis of Assisi for her life devotion to birds and her battle to make the birds lives better by decreasing human cruelty towards the birds.

By decreasing human cruelty to birds makes it a little better world for humans in my opinion, because they are beautiful and enjoyed and not to be slandered and tortured by humans.

Toodie sent me many cases, I remember one in where a woman was taking lye used for opening drains and was soaking the bird seed to in it to “burn” the alimentary canal and kill the pigeons who ate the treated seeds.
The conservation officer staked out the area and the woman was apprehended and prosecuted. That halted the drain cleaner poisonings.

Mary Kelly was very concerned about the purposeful poisoning of pigeons with pesticides and Avitrol, she also expressed concern for secondary poisoning of other birds like Red Tail Hawks and Peregrine Falcons.

I remember I went down to NYC and met Mary Kelly and took a tour of that magnificent Central Park where I saw people feeding and enjoying pigeons. Where an array of beautiful and interesting wild species were present for entertainment and knowledge for the people of NYC.

I suspected it would take more than several dozen cases before we captured the attention to get the legislatures to change the law and get law enforcement at various times to get into position to prosecute people who were poisoning birds.

This led to a ban on the use of Avitrol in NYC. I diagnosed a number of kills including the famous Red Tailed Hawk Pale Male. His mate was killed by Carbofuran a highly toxic insecticide. it was placed on corn. We figured out by whom and he was making money by going around poisoning pigeons.

Carbofuran was so poisonous that it killed birds within a minute or two after they ingested it and died very near to where they ate the corn.

Very often the poisoner would put it on the roof and attached it to the roof, and poisoned them there. So a number of them died on the roof however some fell over the side and people would call in that the birds were poisoned.

It's certainly time that pigeons stop being abused. because they are a beautiful and interesting bird, devoted parents and devoted to other pigeons.

I don't really have anything bad to say about pigeons. We can solve the problem with feces, there are proven methods of safe ways to treat it, without killing the birds.

The greatest benefit of all is the way you feel.