This is an amazing story of love and devotion.

Cara a wounded blind Golden Eagle has been here at the Berkshire Bird sanctuary for the past 27 years. Most Golden eagles live from 1 to 20 years in the wild.  Cara has surpassed that and also hatch 6 eaglets over the years.

RENO, Nev. (March 4) - The eagle has landed — with a thud — after crashing through the windshield of a tractor-trailer on a Nevada highway.
State wildlife officials said Wednesday that a 15-pound golden eagle with a 7-foot wing span has a swollen head but otherwise appears unhurt after crashing into a Florida truck driver's big rig on Monday.

This is one lucky golden eagle. The bird, which weighs 15 pounds and has a 7-foot wing span, smashed through the windshield of a tractor-trailer driving on a Nevada highway. The driver and the bird are OK, officials said Wednesday.

Matthew Roberto Gonzalez of Opa Locka, Fla., was driving on U.S. Interstate 80 in northeast Nevada near Wells, about 60 miles west of the Utah line, when the eagle came crashing into the cab of his truck.
"It looks like she hit it head first. One side of the head is swollen, but there does not appear to be any permanent damage," said Joe Doucette, a spokesman for the Nevada Department of Wildlife.
"The guys in the truck immediately bailed out because it was one ticked-off bird. She was pretty feisty," Doucette told The Associated Press. "Even the officer who responded didn't want to go in there so we had one of our wildlife biologists do it."
The eagle was recovering at the Northeast Nevada Wildlife Rehabilitation Center in Spring Creek.
Gonzalez and a passenger were unhurt. 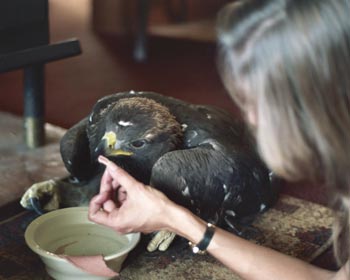 Those people were Marilyn and John Bicking who would be providing the eagle with the necessary rehabilitation she needed until she could be taken to a permanent education facility. We were devastated that we missed seeing her one last time. Mr. Tyner was kind enough to give us their phone number so I called them and they said we were welcomed to come visit the eagle, who was now named ;CARA (meaning ;gentle one). So we did just that just a few months later in February of 1991 we drove to Moab, Utah. 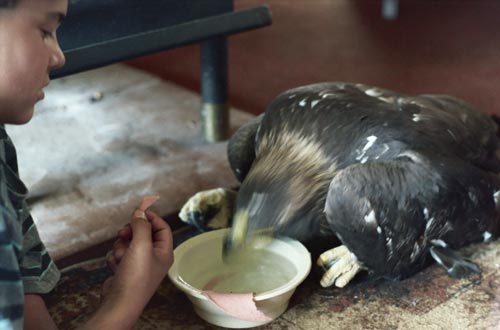 We were so pleased to see just how much care this eagle was given. We were shown all the medical date on her, her x-rays, the federal investigation reports on the incident, etc. Despite her horrific injuries, she looked so healthy. It was so sad to think that such a healthy bird was forever grounded because of being blinded by some uncaring human being that thought that shooting an eagle was a ;sport! 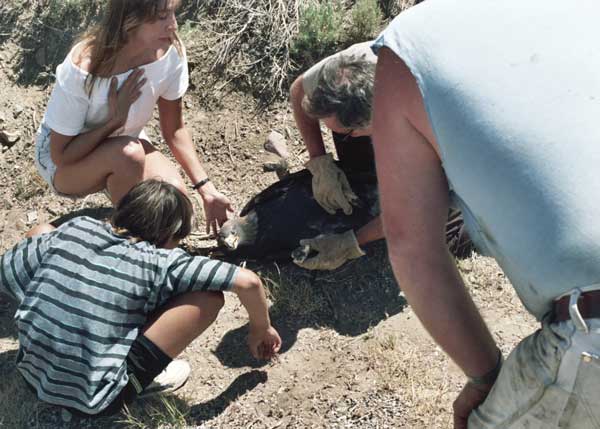 Shortly after we seen Cara in Moab, we learned that she was sent to a place in New York to live out her life in an educational facility so other people could learn about Golden Eagles from her experience.

For years my husband, son, and I have wondered how she was doing. Then in October I decided to ;Google her name on the Internet ;CARA, Golden Eagle and up popped a link to a story. I clicked on that link and could not believe what I read! It was a story on the website of the Berkshire Bird Paradise Sanctuary from the Times Union by Fred LeBrun entitled ;Memory Soars on Birds Wings and it was about a Golden Eagle named ;CARA. When I read the story I knew it was our girl!! I cried and cried with tears of joy when I seen that not only was she still alive and doing well living at the Berkshire Bird Paradise Sanctuary, but that she also had an offspring named ;Daphne that was born and released in the wild. Our rescue of CARA had come full circle. I get chills just thinking about it! 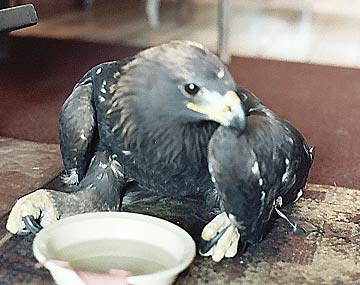 Thank you for taking care of our girl CARA and also for the many other birds in your sanctuary.